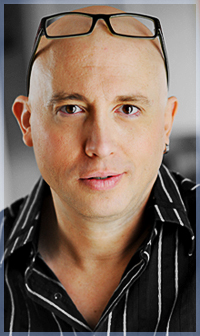 Scotty-Miguel’s first novel, Axel Hooley’s Death Watch List, is a comedy of (mostly) fiction which was inspired by events set in motion one chemotherapy-infused Christmas when he awoke with a 104° fever in his underpants beneath a tree in Beverly Hills.

A screenwriter living in Los Angeles, Scotty-Miguel began his career as an actor, playwright and choreographer in Chicago and New York where he participated in the development of over 200 new plays and original musicals at Chicago Dramatists, the New Tuners Workshop, and the Lehman Engel Musical Theatre Workshop, among others.

His first screenplay was produced by Tomorrow Films, Confessions of an American Girl (original title Lifers’ Picnic), and starred Jena Malone, Brad Renfro, Clifton Collins, Jr. and Alicia Witt. This offbeat dramedy enjoyed a two-year run on Showtime network, as well as brisk DVD rental and sales. Scotty-Miguel was also part of the HBO New Writers’ Project and remained under contract to HBO for two years, primarily focusing on comedy punch-ups and rewrites.

His plays have been produced regionally coast to coast, two of which – Points of Deviation and Texanna Rearranges the Planets and Saves Your Family from the Gates of Hell – have received multiple regional productions. Points of Deviation was the recipient of the Best Play Award given by the Society of Midland Authors, as well as several regional award nominations.

Scotty-Miguel is currently completing work on a screenplay for his family comedy P(r)imping the Pattersons, as well as working with a collaborator on a television series. He anticipates directing his short film, Counting Matthew in the spring.

He is currently at work on the second book in the Axel Hooley trilogy, Axel Hooley and the Unicorn in the Forest.